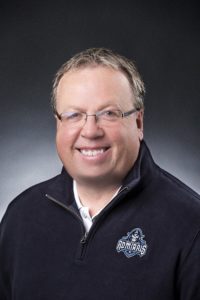 The Admirals first took to the ice in the winter of 1970 as an amateur club known as the Milwaukee Wings, the name was changed in 1971.  After many changes in the league, the Admirals continue to be one the more successful franchises in the American Hockey League.

With changes at the BMO Harris Bradley Center, the team has taken up home at the newly renovated UWM Panther Arena.  Integral to the Admirals success on the ice and off has been Jon Greenberg, who is in his 13th year as the president of the club.

Under his guidance the team has seen significant increases in attendance and corporate sponsorship.   Last season, the Admirals set new organizational standards for revenue generation which was recognized by the American Hockey League.

Join us on February 27th at 5pm to meet and hear from Jon on the current state of the Milwaukee Admirals.